Berg on The Free Excercise of Religion Clause

Another book taking up religion in early U.S. history is The Free Exercise of Religion Clause: Its Constitutional History and the Contemporary Debate by Thomas Berg, University of St. Thomas, St. Paul/Minneapolis (Prometheus Books, 2007), just noted on SSRN. Here's the abstract: 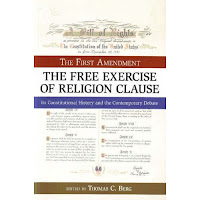 This book, the second in a series published by Prometheus Books on the provisions of the Bill of Rights, collects excerpts from important recent academic scholarship on the Free Exercise Clause. The central question is that addressed by the Supreme Court in the Peyote Case, Employment Division v. Smith: the extent to which free exercise encompasses the right to be free from burdens imposed upon religious practice by laws or regulations not specifically directed at religious practice. Topics covered include, among others, the historical background of religious freedom in the founding era, the normative debate on whether and why religious practice merits special constitutional protection, the challenge of identifying principled boundaries between religious freedom and legal duties, the relative roles of legislatures and courts in protecting religious freedom, and the distinctive considerations raised by the free exercise claims of religious institutions as opposed to individuals. The book is intended to serve as a supplement to case materials on religion and the First Amendment. In addition, because recent debates have focused on whether free exercise is best protected by legislatures as opposed to courts, and by context-specific exemptions as opposed to general constitutional or statutory standards, the book should be of use to those studying the dynamics of governmental institutions and of civil liberties protection.
Posted by Mary L. Dudziak at 7:25 AM