Blogging the OAH: Day One 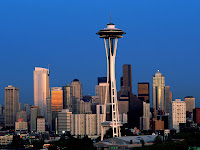 This year's annual meeting of the Organization of American Historians began yesterday in Seattle. The program offers an amazing array of panels to interest legal historians. Yesterday's sessions covered everything from "Creating Peoples: Publications and Power in the Atlantic World" to "No Time Like the Present: Preserving, Archiving, and Teaching the Army's Branch History in the Global War on Terrorism."

Some of the other highlights for me yesterday included a paper by Todd Bennett (U.S. State Dept.) on the American Bicentennial as international history, tracing how British and U.S. diplomats used the 1976 celebrations to reforge the Anglo-American relationship. A roundtable on "U.S. Women's History Beyond Borders" included an eloquent reflection on the intersections of race and sex in 1848 and 2008 by Martha S. Jones (Michigan). And, finally, in a really remarkable panel on race and sexuality in postwar America chaired by Margot Canaday (Princeton), a paper by Tim Retzloff (Yale) on the "sexual commute" in 1950s metropolitan Detroit that draws on a massive sheaf of postwar Detroit police records.

Stay tuned for updates from Day Two...
Posted by Christopher Capozzola at 11:10 AM