Conference on the Thirteenth Amendment 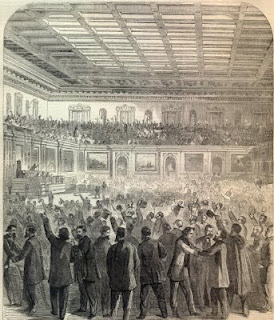 The conference explores the past and present significance of the Thirteenth Amendment, which abolished slavery and provided constitutional authority for eradicating its badges and incidents and, ultimately, to pass wide ranging civil rights laws. The amendment has offered powerful protections for individual rights and equal treatment against wrongs ranging from peonage and housing discrimination to school segregation and trafficking in persons. Yet the amendment's enduring emancipatory significance has been little studied. The conference looks anew at the foundations and reach of the Thirteenth Amendment, bringing together scholars in the fields of history, law, philosophy, political science, and literature for robust inquiry into its antislavery career.

The keynoter and the speakers and commentators on its four panels ("Promises of Liberty," "Rights," "What Is To Be Done: Coercion," and "What Is to Be Done: Race and Nation") include a firmament of historical and legal luminaries, such as (apologies to the omitted) David Brion Davis, Eric Foner, Martha Nussbaum, David Oshinsky, Rebecca Scott, and Geoffrey Stone. The whole list, and further information, is here. Other contacts are Professor Tsesis's secretary at 312.915.8544 or his email address: atsesis@luc.edu.