Call for Papers on Wilsonianism: "World of Power/World of Law" 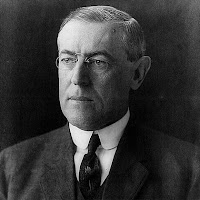 The Woodrow Wilson Presidential Library, in Staunton, Virginia, will present its next national symposium, "World of Power/World of Law: Wilsonianism and Other Visions of Foreign Policy," on April 14-16, 2010. Organizers have called for papers on such topics as:

"Wilsonianism: Its Effect on World Government and Democracy"

"Civil Liberties in Wartime: Then and Now"

"Is George W. Bush a Wilsonian?"

The program committee will accept 250-word abstracts no later than April 15, 2009. Further details are here. Hat tip: H-Net.
Posted by Christopher Capozzola at 1:34 AM