Bach, Ordinary Injustice: How America Holds Court, and more in the book reviews

"The court's decision in Gideon v. Wainwright has been a potent symbol of constitutional rights triumphant. Its holding, that the due process guarantee of the Fourteenth Amendment entitles poor criminal defendants to free lawyers in state prosecutions, was all the more appe

aling because of the romantic story behind it," writes Anthony Lewis, in a review of Ordinary Injustice: How America Holds Court, by Amy Bach, in the New York Review of Books.

But the Gideon case has not led to a system of criminal justice in which defendants who are poor, as almost all are, are assured the effective assistance of counsel against the power of the state. Many have at best a fleeting encounter with a lawyer, who will probably advise them to plead guilty. After being held in prison because they cannot raise the money for bail, they are likely to take that advice.

Those are some of the shattering conclusions of Amy Bach's remarkable book. Other studies have raised doubts that the high hopes of Gideon v. Wainwright were being met. But Bach has done something different: shown us the reality of the criminal justice process in microscopic, human detail. In different places around the country she watched what went on in courtrooms. Her accounts of what she saw should open others' eyes to unwelcome reality. It is a revealing and important book. 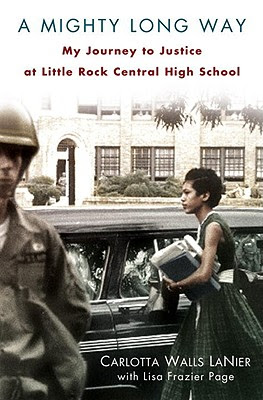 here (subscription required).
A MIGHTY LONG WAY: My Journey to Justice at Little Rock Central High School by one of the Little Rock Nine, Carlotta Walls LaNier, with Lisa Frazier Page, is reviewed by Kevin Boyle in the Washington Post. He finds it an "affecting new memoir."

On the first day of class 400 whites jammed the streets around Central, screaming racial epithets as the Nine walked stone-faced up to the line of guardsmen, who turned them away. "I was completely stunned," says LaNier, not because she was suddenly at the center of a constitutional crisis -- that thought didn't cross her mind -- but because she'd never missed a day of school in her life.

Continue reading here.
Also in the book pages this week, REHNQUIST: A Personal Portrait of the Distinguished Chief Justice of the United States by Herman J. Obermayer is reviewed in the Washington Post. THE CLINTON TAPES: Wrestling History With the President by Taylor Branch is reviewed in the Washington Post and the Los Angeles Times, where Douglas Brinkley finds it "a weird memoir in which the 42nd president emerges as a self-absorbed political genius and a dazzling player with cunning pragmatism and spot-on observations."
Posted by Mary L. Dudziak at 6:24 AM