Gaylord Nelson and Earth Day at the Miller Center 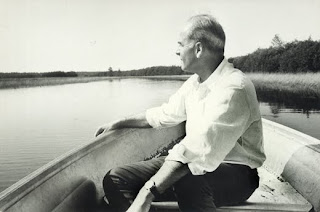 The Governing America in a Global Era (GAGE) program at the University of Virginia's Miller Center of Public Affairs announces the latest event in its GAGE Colloquia Series on Politics and History, Earth Day 1970: Gaylord Nelson and the Making of the First Environmental Generation, by Adam Rome on Friday, October 23. Rome is an Associate Professor of History at Pennsylvania State University and the author of The Bulldozer in the Countryside: Suburban Sprawl and the Rise of American Environmentalism (Cambridge, 2001), which won the Organization of American Historians' Frederick Jackson Turner Award. According to the Miller Center, "Rome is currently finishing a book about the first Earth Day and has written about environmental reform in the Gilded Age and Progressive Era."

The colloquium will be start at 12:30 in the John and Rosemary Galbraith Forum Room at the Miller Center for Public Affairs, 2201 Old Ivy Road, Charlottesville, VA 22904. If you plan to attend, RSVP by the end of business today to gage@virginia.edu or 434.243.8726. The paper is not posted on the web, but the event will be webcasted live and archived here.

Image credit (and accompanying article): Gaylord Nelson at the Apostle Islands (State Historical Society of Wisconsin)
Posted by Dan Ernst at 8:59 AM