Goldstein on Political Censorship of the Theater in 19th C. Europe 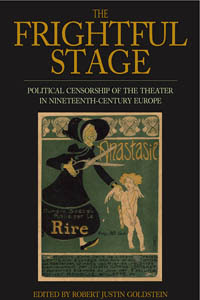 In nineteenth-century Europe the ruling elites viewed the theater as a form of communication which had enormous importance. The theater provided the most significant form of mass entertainment and was the only arena aside from the church in which regular mass gatherings were possible. Therefore, drama censorship occupied a great deal of the ruling class’s time and energy, with a particularly focus on proposed scripts that potentially threatened the existing political, legal, and social order. This volume provides the first comprehensive examination of nineteenth-century political theater censorship at a time, in the aftermath of the French Revolution, when the European population was becoming increasingly politically active.

"Robert Justin Goldstein and his co-authors have written a masterful study tracing the social history of nineteenth-century European theatre censorship. By describing the class nature of theatre censorship and connecting the regulation of the stage to the larger issues of work discipline and the struggle for political power, the authors have produced an important study that will speak to interdisciplinary audiences interested in the relationship between the popular culture, the state, and society." · Michael Nash, Director of the Tamiment Library, New York University

"That theatrical censors were particularly active in continental Europe during the nineteenth century is well known. The virtue of Robert Goldstein's collection is to focus attention on ways in which the situation changed from country to country, from one political situation to another, from one social class to another. Since each chapter is assigned to a different expert, we are assured of having the best possible coverage of these differences from scholars who know intimately the history in each country. Their bibliographical essays, furthermore, provide invaluable points of departure for further research. Anyone who loves nineteenth-century theater or opera in any European context will find this book an invaluable resource." · Philip Gossett, Professor Music and Romance Languages and Literature, The University of Chicago, author of Divas and Scholars: Performing Italian Opera (2006).

"Theater censorship in the 19th-century is a key issue for understanding relationships between urban society, government and new cultural trends. This book offers a large view of the different situations in Europe, showing both the specificities of each country and the converging trends, thus revealing the secret unity of theater as a forum in Europe at large. A very useful and finely composed book." · Christophe Charle, Professor and Director of the Institute of Modern and Contemporary History at the Sorbonne in Paris. He is the author of almost 20 books, including, most recently, Theatres en capitales: Naissance de la société du spectacle à Paris, Berlin, Londres et Vienne (2008).

"This is an exceptionally rich collection of essays on a key intersection between culture and politics in 19th-century Europe. The volume highlights the importance of wide-ranging censorship in European politics of the time, but also the social context in which theater could assume an importance that will surprise and inform a contemporary readership. Stimulating comparative insights cap a significant contribution to modern history." · Peter N. Stearns, Provost, George Mason University, Editor, Journal of Social History

“An excellent introduction to theater censorship for an English-speaking audience as well as for individuals who have the linguistic skills to carry out further, more specialized research. It brings out the similarities between theater censorship across Europe during the nineteenth century, but at the same time provides fascinating details of how different political events in each country influenced the types and severity of theater censorship.” · Janice Best, Chair of the Department of Languages and Literature at Acadia University, Canada and author of La subversion silencieuse: censure, autocensure et lutte pour la liberte d’expression (2001)