The role of law in the context of trade networks is taken up in Ghislaine Lydon, On Trans-Saharan Trails: Islamic Law, Trade Networks, and Cross-Cultural Excha 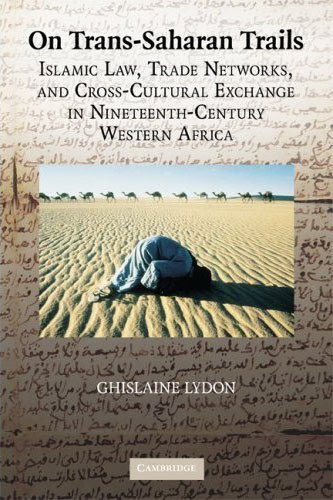 This study is the first of its kind to examine the history and organization of trans-Saharan trade in western Africa using original source material. It documents the internal dynamics of a trade network system based on a case-study of the Wad Nun traders, who specialized in outfitting camel caravans in the nineteenth century. Through an examination of contracts, correspondence, fatwas, and interviews with retired caravaners, Lydon shows how traders used their literacy skills in Arabic and how they had recourse to experts of Islamic law to regulate their long-distance transactions. The book also examines the methods employed by women participating in caravan trade. By embracing a continental approach, this study bridges the divide between West African and North African studies. The work will be of interest to historians of African, Middle Eastern, and world history and to scholars of long-distance trade, Muslim societies, and Islamic law.

Read an excerpt here.
Posted by Mary L. Dudziak at 8:12 AM