The on-line version of the ABA Journal has posted the story 40 Years Later, ‘Chicago 7’ Trial Still an Iconic Event by Martha Neil. The story commences: 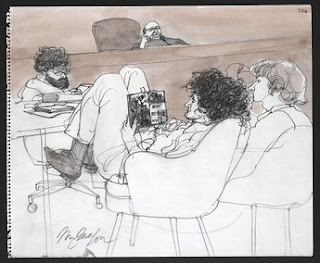 A perfect storm of political unrest, generational conflict and a biased judge set the stage for a 1969 trial that is still memorable 40 years later for its drama and iconic import, participants in an American Bar Association panel told a standing-room-only audience Tuesday.

Although the months-long Chicago Seven conspiracy trial ignited international debate—one searing image was of a bound and gagged Bobby Seale, originally the eighth defendant in U.S. v. Dellinger, et al..—panelists offered a behind-the-scenes glimpse of little-known aspects of the high-profile trial. Brought against activists who participated in anti-Vietnam War protests at the Democratic National Convention in 1968, the federal case offered an opportunity for defendants including Tom Hayden, Abbie Hoffman and Jerry Rubin to create a media circus and they took full advantage of it.

More here, including the news that a full broadcast of the ABA panel on the trial may be downloaded next week from this ABA web page.