Clintonania and more in the book reviews 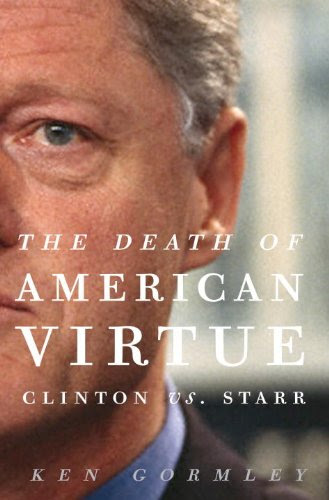 frivolous, but ludicrous." Still, in The Death of American Virtue: Clinton vs. Starr, Ken Gormley "recreates it all, from the Clintons’ investment in the Whitewater development in rural Arkansas to the Paula Jones sexual harassment lawsuit and Clinton’s affair with Lewinsky, culminating in the impeachment trial. This hefty volume, going beyond the sordid details, provides helpful context for the larger story, the fractionalization of American politics that defined the Clinton years." The Death of American Virtue is also reviewed in the Boston Globe.

Here, after all, are the unfiltered reflections of Clinton himself, delivered in seventy-nine taped sessions during his tumultuous administration.... But it becomes clear over the many long pages of Branch's chronicle that the author isn't really wrestling alongside the chief executive to coax a myth-resistant account of Clinton and his record from the maw of history (and thus inevitably tussling at times with Clinton himself). Rather--to stretch sports metaphors a bit--he is

serving as a cut man in the president's corner, salving bruises and dispensing smelling salts before sending him back into the fray.

David Dow's new book The Autobiography of an Execution "will transfix you," writes Art Winslow in the Los Angeles Times.

THE POKER BRIDE: The First Chinese in the Wild West by Christopher Corbett is taken up in the New York Times.
Posted by Mary L. Dudziak at 5:18 AM