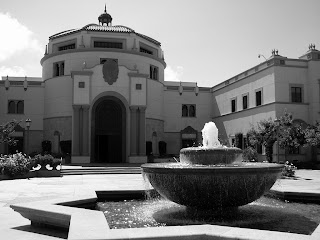 Ongoing today, far from snowbound Washington, D.C., is an Originalism Works-in-Progress Conference, held at the Joan B. Kroc Institute for Peace (right) of the University of San Diego. The line-up for the conference, organized by USD Law's Center for the Study of Constitutional Originalism, is:

Kurt Lash (Loyola Law School and University of Illinois), "The Origins of the Privileges or Immunities Clause, Part I: 'Privileges and Immunities' as an Antebellum Term of Art"
Commentator: John Harrison (University of Virginia)
Moderator: Donald Dripps (University of San Diego)

The Center's mission statement is as follows:

Originalism is the view that the Constitution has a fixed and knowable meaning established at the time of its enactment. The Center for the Study of Constitutional Originalism at the University of San Diego School of Law has as its mission the study of all aspects of originalism. In particular, the Center studies arguments for and against the originalist theory of interpretation, the variety of specific originalist interpretive methods, and the original meaning of particular constitutional provisions.