A Symposium on Hamburger's Nature of Judicial Duty

An announcement for the event explains: 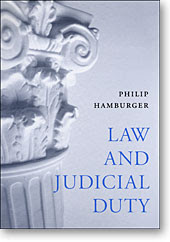 In his recent book, Law and Judicial Duty, Philip Hamburger traces the early history of what is today called "judicial review." Working from previously unexplored historical evidence, he shows that common law judges had the authority to hold governmental acts unconstitutional, not because of a special power over constitutional law, but only pursuant to a distinctive requirement of the judicial office that generally obligated them to follow "the law of the land." Judges honored their offices precisely by adhering to the "Law." While judges could strike down purported laws as unconstitutional, they did so always bound by a duty as strictly limiting themselves as any other. By reviving an understanding of these common law ideals, Law and Judicial Duty calls into question the modern assumptions that judicial review is a power within a scheme of conflicting powers, or a power, in any sense, to make law. It places in view a very different paradigm of law and judging. The book also sheds new light on a host of misunderstood problems, including intent, manifest contradiction, the status of foreign and international law, the cases and controversies requirement, and the authority of judicial precedent.

This symposium gathers leading scholars in the areas of the history of law and politics, constitutional law, and jurisprudence to take up the challenge posed by Philip Hamburger in his provocative work. From their various disciplinary perspectives, participants enter into in a dialogue with Hamburger over the meaning of the history of the common law, the nature of adjudication, and the true significance of judicial review as we experience it in our constitutional system today.