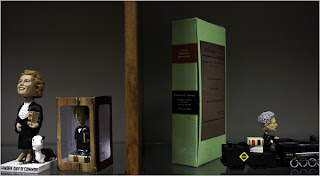 We somehow missed the story Relax, Legal Scholars: Bobbleheads Are Safe at Yale when it first appeared in the New York Times--quite unaccountably, as I am a proud owner of one the featured items, a bobblehead of Justice Brandeis riding engine 2499 of the Erie Railroad, which struck Harry Tompkins and produced the great case of Erie R.R. v. Tompkins. (Professor Davies once handed them out to attendees of George Mason's session of the District of Columbia Area Legal History Roundtable, thereby raising the bar for party favors to an unclearable height.) Hat tip to Fred Turner.