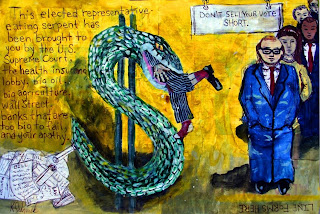 The Miller Center of Public Affairs and the Campaign Finance Institute co-hosted a panel recently on Citizens United v. FEC. In the word of the Miller Center's announcement, the panelists discussed "this controversial case and the legislation that has been proposed to amend it, and the critical relationship between campaign expenditures and American democracy." The panelists included campaign finance experts, journalists, political theorists, and others. I note the event here because of the talk by Gerald Berk, University of Oregon, which provided useful historical context on the case. (You may read the transcript or listen to the podcast here.) See also Kurt Hohenstein's Coining Corruption: The Making of the American Campaign Finance System.

Image credit: MatadorNights/Kate Sedgwick
Posted by Dan Ernst at 12:41 AM