Was John Marshall a Bad Historian? 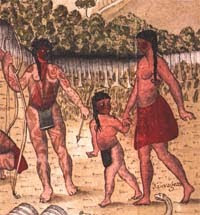 Many thanks to Mary for inviting me to contribute! I have been a beneficiary of the blog in countless ways in the past few years, so it is an honor to be able to participate. I recently had occasion to delve into a new area of research as I prepared to moderate a faculty workshop at the University of Illinois with the lofty title "Indigenous Subjects in Imperial Law: Johnson v. McIntosh in Hemispheric Perspective" (thanks to the kind invitation of fellow legal historian Daniel Hamilton). As many of you will know, in Johnson v. McIntosh (1823), Chief Justice John Marshall declares the sovereignty of the United States government over American Indian property. According to Marshall, the government had inherited this dominion from Great Britain, which had acquired it through the doctrine of "discovery." The case granted American Indians a "right of occupancy," but no more. I was familiar with the Johnson case largely through teaching it in my first-year property course. Among property professors Marshall is praised for having created at least a modicum of rights for Native Americans and for protecting native land from incursions by white settlers (since Indians could only sell to the U.S. government under his ruling, not to individual citizens). The case later served in the mid-twentieth century as a precedent for American Indian land claims. But as I prepped for the workshop, I discovered that recent work in legal history paints a different view, one that brings into question Chief Justice Marshall's motivations and also demonstrates his own questionable use of history. Stuart Banner's book How the Indians Lost Their Land, Brian Slattery's essay in the edited volume Despotic Dominion, and Lindsay Robertson's book-length treatment Conquest by Law, all come to a similar conclusion: Marshall's interpretation of colonial history was woefully inadequate. To complicate matters, the historical portions of the opinion, which are lengthy, are drawn from Marshall's own prior work: a five-volume biography of George Washington, published in 1804 and later excerpted as the History of the American Colonies, published in 1824. Banner and Robertson also go into great detail about Marshall's hidden motivations for deciding the case in the way he did, namely to protect state grants of preemption rights to white settlers who wanted to purchase Indian land. So it seems we have two conflicting views of the Johnson case and of Marshall's role in particular (and forgive the oversimplification): property professors view the case as good law, in the sense of having created a leg, albeit a weak one, for Indian property rights to stand on; whereas legal historians view the case as bad law, in the sense of being based on inaccurate history (and guided by suspect motivations). So one question that comes to mind for me is this: can bad history make good cases? Does inaccurate history make a case any less legally legitimate? I wonder also if there are other examples of landmark cases based on history that is demonstrably wrong.
Posted by Allison Brownell Tirres at 6:08 PM