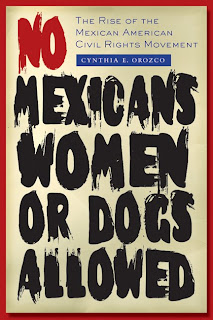 In my work, I've looked at how Mexican Americans living along the U.S.-Mexico border in the nineteenth century interacted with the newly-imposed American legal system. Since I began that inquiry in graduate school, scholarship in the area of Latino legal history has expanded quite dramatically. Current issues of the Journal of American History and the Journal of Legal Education attest to that expansion. Both have special content dedicated to recent work in Latino history, including some discussion of legal history. In a section of the September 2010 issue of the JAH entitled "Latino History: An Interchange on Present Realities and Future Prospects," ten scholars of Latino history discuss the state of the field. The issue also contains reviews of ten recent books in this area. Of particular interest to legal historians will be the reviews by Grace Peña-Delgado of Patrick Ettinger's Imaginary Lines: Border Enforcement and the Origins of Undocumented Immigration, 1882—1930, and one by Eduardo Obregón Pagán of Cynthia E. Orozco's No Mexicans, Women, or Dogs Allowed: The Rise of the Mexican American Civil Rights Movement.

Orozco's book is also reviewed, along with three others, in an essay by Michael A. Olivas in the November issue of the Journal of Legal Education. In "The Arc of Triumph and the Agony of Defeat: Mexican Americans and the Law," Olivas looks at what he calls "an understudied and fascinating topic: the litigation for Mexican American educational and civil rights following WWI and WWII." He examines Orozco's work as well as Richard R. Valencia's Chicano Students and the Courts: The Mexican American Legal Struggle for Educational Equality; Philippa Strum's Mendez v. Westminster: School Desegregation and Mexican-American Rights; and Ignacio M. Garcia's White But Not Equal: Mexican Americans, Jury Discrimination, and the Supreme Court. (The link to the table of contents of the issue is here; the full text of the essay is here.)
Posted by Allison Brownell Tirres at 5:57 PM