The William Nelson Cromwell Foundation annually awards a series of prizes after exercising its independent judgment on the recommendations of a committee of the American Society for Legal History.  Among these is a $5000 BOOK PRIZE for excellence in scholarship in the field of American Legal History by a junior scholar.  The prize is designed to recognize and promote new work in the field by graduate students, law students, post-doctoral fellows and faculty not yet tenured. The work may be in any area of American legal history, including constitutional and comparative studies, but scholarship in the colonial and early national periods will receive some preference.  The prize is limited to "first books," i.e., works by a junior scholar that constitute his or her first major undertaking. The 2011 winner is Mark Brilliant, The Color of America Has Changed: How Racial Diversity Shaped Civil Rights Reform in California, 1941-1978 (Oxford University Press, 2010).  The citation reads: 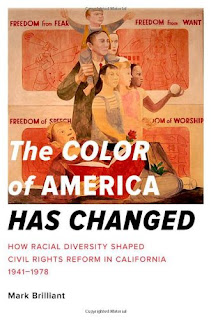 In The Color of America Has Changed, Mark Brilliant opens up a new vista on what Nathan Glazer once called the “great enterprise” of determining what “the ‘equal protection of the laws’ should concretely mean in a multi-racial and multi-ethnic society.”  Without slighting “the exceptionally invidious history of antiblack racism” in the American South and urban North,  Brilliant directs us to civil rights in California, the country’s “racial frontier,” from the 1940s through the 1970s.  At first, race liberals assumed that the same “binary logic” that governed struggles between blacks and whites would also prove serviceable when the category of non-whites was expanded to include persons of Chinese, Japanese, and Mexican descent.  Yet as they attempted to build coalitions, bring lawsuits, and pass laws to address discrimination in property law, education, housing, labor, public accommodations, and family law, they discovered that the groups experienced bias in different ways and preferred different and sometimes conflicting means of redress.  Brilliant brings this complexity to life with impressive research in the manuscripts of civil rights organizations, personal papers, court files, and other public records.  He sustains his argument and the readers unflagging interest with a disciplined and artfully constructed narrative.  The result is a new past with which to comprehend America’s “increasingly complex, nonbinary, multiracial civil rights law, policy, and politics.”