Lowe on Edwards, The People and Their Peace

A Separate Peace? The Politics of Localized Law in the Post-Revolutionary Era by Jessica Lowe, Ph.D. candidate, Princeton University, is noted on SSRN.  It is a review essay on The People and Their Peace by Laura Edwards, and it appears in Law and Social Inquiry, Vol. 36, No. 3, 2011.  The essay unfortunately is not downloadable.  Here's the abstract: 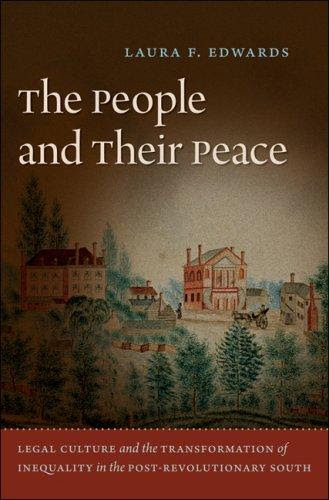 Studying the law of the pre-Civil War South – so intricately linked with slavery and, along with it, many of the worst aspects of American history – is a tricky business. Law is often seen as peripheral to Southern life before the Civil War, and the South as an outlier in the American legal history of that era. In The People and Their Peace (2009), Laura Edwards demonstrates the profoundly legal nature of Southern society, and takes an important step towards integrating the legal history of the South with that of the nation. Edwards identifies two dueling legal cultures in North and South Carolina between 1787 and 1840 – the law of local courts, which she terms localized law, and the state law of professionalized lawyers and reformers. She argues that white women, slaves, and the poor fared better in localized law – which was based on notions of popular sovereignty and the flexible rubric of restoring “the peace” – than in state courts, which were steeped in a national culture of individual rights that led to more restrictive results. This essay questions Edwards’s dichotomy between local law and state law and her depiction of the popular content of localized law, while both noting the significance of her work and affirming the importance of law to Southern life.