Kenneth W. Mack, Harvard Law School, has published Law and Local Knowledge in the History of the Civil Rights Movement in the Harvard Law Review. It is a review of Courage to Dissent: Atlanta and the Long History of the Civil Rights Movement, by his soon-to-be Harvard colleague, Tomiko Brown-Nagin, University of Virginia School of Law. Here is the abstract: 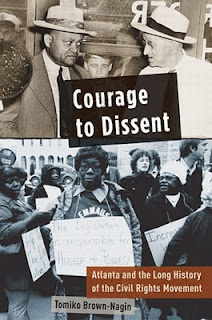 We live in chastened times. A generation ago, young legal academics often desired to explain how the Supreme Court could be an effective participant in the social controversies of the day, and young liberal lawyers believed that public impact litigation could be an effective strategy for social reform. The most visible evidence for that optimism was the NAACP’s desegregation litigation that led to the Court’s decision in Brown v. Board of Education, which was conventionally seen as the opening act of the civil rights movement. At present, such dreams seem hopelessly utopian. Ambitious legal scholars now make their careers by explaining how, as a descriptive or normative matter, one should not expect courts to be agents of social change. Conservative lawyers, rather than liberals, spend decades developing strategies to effect public policy through the judiciary. Nominees to the Supreme Court routinely express the requisite reverence for the Court’s decision in Brown, and the equally requisite aversion to the judicial role that people once thought the decision symbolized. Historians, too, who once celebrated the NAACP’s school desegregation litigation as a guidepost on the road to racial equality, marked the half-century anniversary of the decision in 2004 with more regret than celebration. Some even lamented the disappearance of the black autonomy that is thought to have existed in a segregated society. In our own time, it has become common to rely on a familiar trope of social thought to explain these changing opinions on the role of law in American life. We are social realists now, the argument goes, and have left behind the liberal idealism of an earlier age. In Courage to Dissent: Atlanta and the Long History of the Civil Rights Movement, Professor Tomiko Brown-Nagin steps into this contentious territory to show what legal history can contribute to a field where academic writing and political culture seem to have reached a confluence. She uses the local story of the movement in Atlanta to challenge what is fast becoming the received wisdom about an era whose history has become a touchstone for a much larger set of debates about the role of law in American life.

Courage to Dissent addresses the role of the judiciary as a participant in the political conflicts of the day — an issue about which Americans are still ambivalent, even as they have exported the idea of a Supreme Court with the power of judicial review around the world. The book is divided into three parts, each of which critiques a particular school of scholarship on law and social change during the civil rights era. First, Brown-Nagin orients herself against a view of civil rights law and history that might be termed “legal liberal,” the familiar narrative that focuses on national actors like the NAACP and its campaign to convince the Supreme Court to invalidate de jure segregation. Second, she critiques a group of scholars who claim that the NAACP’s Supreme Court litigation was, for the most part, ineffective and mobilized opponents of integration more than it did those who sought to challenge the status quo. Third, she criticizes those scholars who contend that desegregation — particularly in the schools — was an elite, idealistic project that did not mesh with the desires of local black communities that often simply wanted good schools for their children. All three bodies of scholarship, she contends, wrongly view civil rights history through the prism of the national organization that claimed to speak for African Americans — the NAACP — and the Supreme Court litigation that be-came the organization’s most visible project

Although she doesn’t frame it that way, Brown-Nagin is asking a question of representation — who can speak for members of a minority group? On the local level, she contends, many actors competed with each other to determine who could represent black people, and no one truly spoke for African Americans as a whole. Moreover, blacks and whites often took unexpected positions in Atlanta’s politics of race — at least from the perspective of the existing scholarship on law during the civil rights movement. Posing the question of representation also allows Brown-Nagin to make an intervention in the ongoing debate over the role of law during the civil rights movement. Law, including Supreme Court decisions, often helped and hindered the participants in civil rights–era controversies in unexpected ways, she argues. Presenting what she calls “a bottom-up historical analysis,” Brown-Nagin concludes that “an incredibly complex picture emerges” of the legal and social history of Atlanta’s civil rights movement (p. 84). It is precisely that appreciation for complexity that constitutes the greatest strength of Courage to Dissent, in a field where broad, thesis-driven narratives have dominated the debate.
Posted by Dan Ernst at 12:30 AM