On Thursday, April 12, 2012, the New York Law School will be hosting a symposium in honor of Dean Emeritus James F. Simon, entitled Supreme Court Narratives: Law, History, and Journalism. According to the announcement: 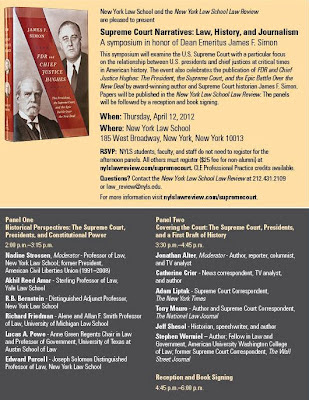 This symposium will examine the U.S. Supreme Court with a particular focus on the relationship between U.S. Presidents and Chief Justices at critical times in American history. The event also celebrates the publication of FDR and Chief Justice Hughes: The President, the Supreme Court, and the Epic Battle Over the New Deal by award-winning author and Supreme Court historian James F. Simon. The panels will be followed by a reception and book signing.

These themes reflect Professor Simon's contributions to Supreme Court scholarship both as a journalist covering the Court for Time magazine and as a prolific author. His forthcoming book will be the latest in his series of books that have examined the relationship of a president and chief justice at a critical moment in history. Professor Simon's other books include Lincoln and Chief Justice Taney: Slavery, Secession, and the President's War Powers, What Kind of Nation: Thomas Jefferson, John Marshall, and the Epic Struggle to Create a United States, which Joseph J. Ellis called "a major contribution," and The Center Holds: The Power Struggle Inside the Rehnquist Court. He has received numerous awards and honors, including The New York Times "Notable Book," a Certificate of Merit and Silver Gavel Award from the American Bar Association, and a Scribes Book Award from the American Society of Writers.

Registration is open here.
Posted by Dan Ernst at 12:30 AM