Sara McDougall, a historian at the John Jay College of Criminal Justice, City University of New York, has just published Bigamy and Christian Identity in Late Medieval Champagne with the University of Pennsylvania Press, which writes: 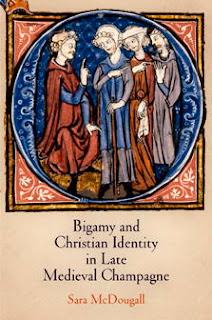 The institution of marriage is commonly thought to have fallen into crisis in late medieval northern France. While prior scholarship has identified the pervasiveness of clandestine marriage as the cause, Sara McDougall contends that the pressure came overwhelmingly from the prevalence of remarriage in violation of the Christian ban on divorce, a practice we might call "bigamy." Throughout the fifteenth century in Christian Europe, husbands and wives married to absent or distant spouses found new spouses to wed. In the church courts of northern France, many of the individuals so married were criminally prosecuted.

In Bigamy and Christian Identity in Late Medieval Champagne, McDougall traces the history of this conflict in the diocese of Troyes and places it in the larger context of Christian theology and culture. Multiple marriage was both inevitable and repugnant in a Christian world that forbade divorce and associated bigamy with the unchristian practices of Islam or Judaism. The prevalence of bigamy might seem to suggest a failure of Christianization in late medieval northern France, but careful study of the sources shows otherwise: Clergy and laity alike valued marriage highly. Indeed, some members of the laity placed such a high value on the institution that they were willing to risk criminal punishment by entering into illegal remarriage. The risk was great: the Bishop of Troyes's judicial court prosecuted bigamy with unprecedented severity, although this prosecution broke down along gender lines. The court treated male bigamy, and only male bigamy, as a grave crime, while female bigamy was almost completely excluded from harsh punishment. As this suggests, the Church was primarily concerned with imposing a high standard on men as heads of Christian households, responsible for their own behavior and also that of their wives.

“This is an excellent book,” blurbs Shannon McSheffrey of Concordia University.  “McDougall makes a persuasive argument that understanding the prosecution of bigamy in fifteenth-century Troyes entails some fairly radical changes in how we see late medieval marriage and the place of Christianity in late medieval culture.”
Posted by Dan Ernst at 11:00 AM