New Release: Ghachem, "The Old Regime and the Haitian Revolution"

Malick W. Ghachem, University of Maine School of Law, has just published The Old Regime and the Haitian Revolution, with Cambridge University Press.  Here is the publisher's description: 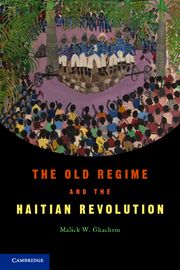 The Haitian Revolution (1789–1804) was an epochal event that galvanized slaves and terrified planters throughout the Atlantic world. Rather than view this tumultuous period solely as a radical rupture with slavery, Malick W. Ghachem's innovative study shows that emancipation in Haiti was also a long-term product of its colonial legal history.  The key to this interpretation lies in the Code Noir, the law that regulated master-slave relations in the French empire.  The Code's rules for the freeing and punishment of slaves were at the center of intense eighteenth-century debates over the threats that masters -- not just freedmen and slaves -- posed to the plantation order.  Ghachem takes us deep into this volatile colonial past, digging beyond the letter of the law and vividly re-enacting such episodes as the extraordinary prosecution of a master for torturing and killing his slaves. This book brings us face-to-face with the revolutionary invocation of Old Regime law by administrators seeking stability, but also by free people of color and slaves demanding citizenship and an end to brutality. The result is a subtle yet dramatic portrait of the strategic stakes of colonial governance in the land that would become Haiti.

"This book will have a major impact on our understanding of the single most important turning point in the history of New World slavery. A revolutionary study of revolution, this beautifully written and deeply researched work shows that the 'rupture narrative' has obscured critical aspects of continuity and the ways in which laws governing master-slave relations provided a changing framework for action in the slaves' quest for freedom."
-- David Brion Davis, Sterling Professor of History Emeritus and Director Emeritus of Yale's Gilder Lehrman Center for the Study of Slavery, Resistance, and Abolition

"The Old Regime and the Haitian Revolution offers a sweeping and lucid analysis of the making and unmaking of slavery and colonial law in Haiti. Ghachem brings together insightful analysis of juridical and political debates with riveting stories of how the enslaved and free people of Saint-Domingue sought to use law in pursuit of liberty. This brilliantly crafted book is a vital contribution to our understanding of law, empire, and revolution in the French Atlantic."

-- Laurent Dubois, author of Haiti: The Aftershocks of History

"Malick Ghachem's new book is a major contribution to our understanding of colonial Saint-Domingue and the Haitian Revolution. Ghachem argues that reforms meant to limit the abuses of slavery did more to weaken the institution than the criticisms of abolitionists, and he points out surprising continuities between the colonial regime and the new laws laid down by Toussaint Louverture and his successors. No one interested in the struggle against slavery during the revolutionary era can ignore his contribution."