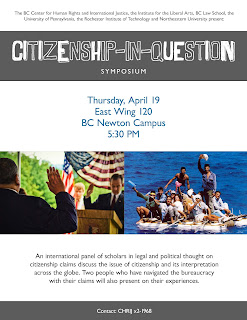 While we await the Supreme Court’s decision in United States v. Arizona, other weighty issues of immigration and citizenship continue to defy resolution and generate academic debate.  Take, for instance, the issue of territorial birthright citizenship:  Will the United States abandon its historical practice of jus soli?  Debates on this issue frequently invoke historical antecedents.  Not just domestic history, either.  The 1961 Convention on the Reduction of Statelessness favors jus soli by stipulating the norm that an important measure to avoid statelessness at birth is to provide nationality to children born on the territory who would otherwise be stateless.

I was fortunate to participate in a superb conference on this subject (April 19-21 at Boston College), titled Citizenship in Question:  Evidentiary Challenges for Jus Soli.  The co-sponsors included The Boston College Center for Human Rights and International Justice, the Institute for the Liberal Arts, Boston College Law School, the University of Pennsylvania, the Rochester Institute of Technology and Northeastern University.  The program, with list of participants and paper titles, is available here.  Look for speedy publication of the papers, which will be of great benefit particularly with respect to comparative citizenship practices. Update:  A conference report, with summaries and paper abstracts, is now available here.

The conference touched on what has always struck me as an intriguing historical phenomenon.  Citizenship by birth on the territory – the jus soli – is largely a New World phenomenon:  Not just the United States and Canada, but Mexico, and, with one or two exceptions, all of central and south America.  The rest of the world primarily follows the jus sanguinis.  What is interesting is that jus soli is customarily associated with common law legal systems, while civil law countries are committed to jus sanguinis.  Except in the Americas.  Perhaps there is a hemispheric treatment of the historical origins of jus soli in the Americas.  If not, a timely opportunity beckons...
Posted by Polly J. Price at 4:22 PM