[Each year I write a biographical sketch for the exam in my American Legal History course.  Here is this year’s.] 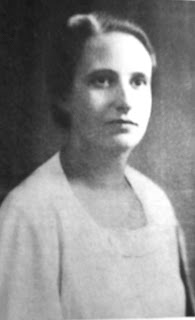 Marion Janet Harron (1903-1972) was born in San Francisco.  She graduated Phi Beta Kappa from the University of California, Berkeley, in 1924 and stayed on for a law degree, which she received in 1926, having made law review.

While a student, Harron was drawn into what one historian has called “the female dominion of American reform,” a network of women-led, nonpartisan organizations that worked to improve the conditions of children, the poor, and the working classes.  During her summers in law school, for example, she worked for a state board that set minimum wages for working women.

Although Harron passed the California bar the summer she graduated from law school, instead of practicing law in her home state she moved to New York City.  For two years she worked on the staff of the National Industrial Conference Board (NICB), a nonprofit, nonpartisan business group that sought to popularize practices “beneficial to employers and employees and subservient to the welfare of the nation.”  That a social reformer like Harron would work for a business group is not as unlikely as you might think.  Many people believed that competition prevented well-intentioned businessmen from paying their workers a living wage.  If businessmen could combine in trade associations and set minimum prices, they could pay their workers better.  Before the passage of the National Industrial Recovery Act, however, they risked prosecution under the antitrust laws.  For this reason, Harron praised the NICB for showing “how far the economically justifiable combination of business is to be hampered by our inflexible law against combination.”

After her stint at the NICB, Harron surveyed New York’s factory laws for a state commission.  During this period she helped the Columbia University law professor Herman Oliphant develop legal arguments against court injunctions that forbid workers from joining trade unions.  When Oliphant created the short-lived Johns Hopkins University Institute for the Study of Law, he hired Harron to compile a survey of the research projects of American law professors.  In 1929 she returned to New York City.  Although her obituary said she “practiced law on Wall Street,” Harron never worked for a corporate law firm.  Rather, she toiled in the trusts, estates, and real estate department of a major bank.

Throughout this period Harron continued to be active in female-headed reform groups.  Several women in her circle organized the Women’s Division of the Democratic National Committee, which, after FDR’s election in 1932, found government jobs for female professionals.  Presumably with the help of the Division–and demonstrably with the endorsement of the Democratic Senator from California–she landed a place on the legal staff of the National Recovery Administration (NRA).  (It is not known whether Oliphant or one of her Berkeley professors recommended her.)  At NRA, Harron never went to court.  Rather, she negotiated with businessmen to ensure that the “codes of fair competition” for the food and textile industries were fair to workers and consumers.  The experience left her convinced that lawyers ought to educate themselves “rigorously in the science of finance, of economics and of business.”

Harron stayed at NRA until the Schechter decision of May 1935.  From the wreckage of NRA she leapt to the Resettlement Administration (RA), a federal agency headed by Rexford Tugwell that helped tenant farmers relocate from worn-out regions.  Conservative Congressmen, whose landowning constituents wanted at least some of their tenants to stay where they were, hated RA.  After their attacks seriously weakened the agency, Harron at last decided to try practicing law back in California.  She had barely begun when, in June 1936, the Women’s Division landed her a presidential appointment to a twelve-year term on the U.S. Board of Tax Appeals.  She replaced the BTA’s first and only female member.

The BTA (renamed the U.S. Tax Court in 1942) was organized as an independent agency, distinct from the Treasury Department, to hear appeals from the Bureau of Internal Revenue (BIR; now known as the Internal Revenue Service).  It was a “legislative” or “administrative” court, not an “Article III” court in the federal judiciary.  Sitting alone, members of the BTA decided appeals on a record created before them by the lawyers for the taxpayer and the BIR under the procedures federal courts followed in equity cases.  As a tax lawyer explained in 1939, “Winning or losing a tax case before the Board is precisely the same as winning or losing a law suit before a court–no more, no less.  Both demand the same capacities and the same tactics.”  When Harron and the other members of the BTA heard cases outside Washington, they often used the courtrooms of the state and federal judiciary.

In 1945 a female lawyer at the BIR praised Harron “for the clarity of reasoning and breadth of knowledge of tax law revealed in her opinions.”  Yet when her term ended in 1948, the members of ABA’s tax section voted 104 to 57 against her renomination.  Senator Walter George (D. Georgia), one of the conservatives FDR targeted in the Democratic primaries of 1938, called a hearing to see whether, as the tax lawyers charged, Harron lacked “the temperament to sit as a judge.”

No one suggested that Harron’s written opinions were less than competent.  Instead, the case against her turned on her conduct in the “courtroom.”  “She handles her trials in a disgraceful fashion, insulting both attorneys and witnesses,” one lawyer complained.   Another, George Morris, charged that Harron had usurped “the privileges of counsel” by deciding the order in which the various parts of a case would be taken up.  Another lawyer testified that in one of his cases “the entire order was rearranged so that I could not remember what had gone in and what had not gone in, and when I got through with the trial I did not know whether I had proved my case or not.  I was uncomfortable and humiliated by being told that I was not proceeding properly with the case.”  Although the lawyer had appeared before the BTA and Tax Court for twenty years, Harron had “lectured [him] continually like a young school boy.”

Morris denied that the tax lawyers opposed Harron’s reappointment because of her sex.  “I am very much in favor of . . . recognizing the ability of the many able woman lawyers in this country,” he said.  Indeed, the ABA’s tax section had named two women to its list of sixteen candidates for vacancies on the Tax Court.  Still, Morris thought it “very important to the tax-collecting system of this country that the confidence of the people be maintained in the tax system and that the [taxpayer] . . . have his day in court.”  Further, the client’s counsel was “entitled to courteous treatment.”  Although Tax Court judges ought to follow “the best standards of judicial procedure,” that was not what lawyers had come to expect from Harron.  Indeed, Morris reported, several had used words he did not “care to repeat for the record” when they learned that they were to appear before her.

In reply, Harron acknowledged that she had pointed out when lawyers made mistakes, but she characterized her remarks as “observations” not “criticism.”  “I have never consciously embarrassed counsel,” she said, “and I have endeavored to avoid the appearance of being unduly critical or stern with any counsel in any proceeding.”  But, she continued, “it is the business of the judge to do nothing less than justice.  If that is to be attained, sometimes . . . the court itself must interrogate witnesses and ask questions which trial counsel might not have asked.”  If forced to choose between doing “exact justice” and hurting “the feelings or pride of some trial counsel,” Harron thought her duty plain.  “I am to obtain the facts.”

J.P. Wenchel, a former BIR General Counsel, spoke on Harron’s behalf.  He opined that other tax lawyers opposed Harron’s reappointment because “men do not like to be criticized by women. . . .  [B]eing criticized by a male judge is bad enough, but when a woman takes [a case] over, it is just adding insult to injury.”

Harron was reappointed, and she served on the Tax Court until 1970.  A eulogist recalled that she “enjoyed her privacy.”  She never married but did develop at least one close emotional attachment, to the journalist Lorena Hickock.  Harron regularly visited Hickock’s summer home on Long Island.  Doris Faber, Hickock’s biographer, reported that Harron’s letters to the journalist “contain passages of a passionate intensity that strongly hint at physical intimacy.”  After Harron visited Hickock in the summer of 1945–that is, about when tax lawyers started grousing over her conduct of trials–the journalist described her as being “in a nervous and emotional state” and “very explosive.”  Hickock reported that Harron had “gott[en] into a fight” with another guest, the bodybuilder Clarence Ross.  She attributed Harron’s irritability to the onset of menopause.

Harron lived with her mother until her mother’s death, a year before Harron’s own.