Armies, The Financial Crisis, and More: This Week in the Book Pages 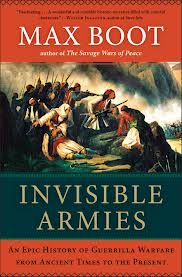 In the New York Times this week, Mark Mazower reviews Max Boot's Invisible Armies: An Epic History of Guerrilla Warfare from Ancient Times to the Present (Liveright).  "We get the story of guerrilla warfare, and also an account of how soldiers have tried to combat it" Mazower writes, "and then, mostly at a tangent to the other two, there is the history of terrorism."

You'll find several other reviews on books about war and the U.S. military this week:  The Wall Street Journal has a review of Zumwalt: The Life and Times of Admiral Elmo Russell "Bud" Zumwalt Jr (Harper) by Larry Berman.  The New York Times has a review of Fred Kaplan's The Insurgents: David Patraeus and the Plot to Change the American Way of War (Simon & Schuster).

The Washington Post (here), the LA Times (here), and TNR: The Book (here) have reviews of Alan Blinder's After the Music Stopped: The Financial Crisis, The Response, and the Work Ahead (Penguin).

Other reviews of interest this week: Hector Tobar reviews Joshua Bloom and Waldo E. Martin Jr's Black Against Empire: The History and Politics of the Black Panther Party (University of California).  And, in the New York Times, Candice Millard reviews Edward Ball's The Inventor and the Tycoon: A Gilded Age Murder and the Birth of Moving Pictures (Doubleday).
Posted by Clara Altman at 9:13 AM