The Life of Justice Sotomayor, and More: This Week in the Book Pages 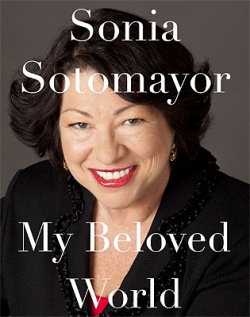 More this week on Justice Sotomayor's My Beloved World (Knopf): In the LA Times, Hector Tobar writes that "It's a book explicitly intended to address her newfound role as a Latina role model.  From her story of family and community strength and dysfunction, a worthy Latino addition to the pantheon of mythic American civi stories emerges."  In the Wall Street Journal Carla Main writes, "My Beloved World is filled with inspiring, and surprisingly candid, stories about how the Supreme Court's first Hispanic justice overcame a troubled childhood to attend Princeton and Yale Law School, eventually earning a seat on the nation's highest court.  But readers hoping to gain insight from the book into how Ms. Sotomayor might rule in key cases will have to dig deep for hints of her legal philosophy."  And according to Emily Bazelon in her review in the New York Times, "This is a woman who knows where she comes from and has the force to bring you there."

Also making the rounds this week, Lawrence Wright's Going Clear: Scientology, Hollywood, and the Prison of Belief (Knopf) is reviewed in the New York Times (here), the LA Times (here), and the Washington Post (here).

In the LA Times, Tony Perry reviews Fred Kaplan's The Insurgents: David Patraeus and the Plot to Change the American Way of War (Simon & Schuster).  And in the New York Times, a review of Peter Ackroyd's Foundation: The History of England From Its Earliest Beginnings to the Tudors (Thomas Dunne/St. Martin's).

At TNR: The Book this week, you'll find a review of Becoming Right: How Campuses Shape Young Conservatives (Princeton) by Amy J. Binder and Kate Wood, a review of Charles Wheelan's Naked Statistics: Stripping the Dread from the Data (Norton), and a review of Bill Streever's Heat: Adventures in the World's Fiery Places (Little, Brown and Company).
Posted by Clara Altman at 5:00 AM