Michael M. O'Hear, Marquette University Law School, has posted (The History of) Criminal Justice as a Morality Play, which is a review of Stephanos Bibas's The Machinery of Criminal Justice.  It also appears in the University of Pennsylvania Law Review’s PENNumbra 161 (2013).  Here is the abstract: 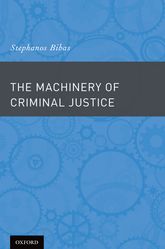 Stephanos Bibas's new book, The Machinery of Criminal Justice, looks back to colonial-era criminal justice as an ideal of sorts. Criminal trials in that time were a "participatory morality play," in which ordinary members of the community played a crucial role. In Bibas's view, the subsequent professionalization of the criminal-justice system, as well as related developments like the introduction of plea bargaining, have led to widespread contemporary distrust of the system. The present essay reviews Bibas's book and suggests additional reasons besides professionalization why the morality-play model broke down in the nineteenth century. Taking these additional considerations into account, the prospects for reviving the morality-play model may be even dimmer than Bibas recognizes, although a number of his proposed reforms nonetheless appear attractive.