This Week in the Book Pages: Learning from the Past, Predicting the Future

A new issue of the New York Review of Books is out. LHB readers will want to check out David Cole's review of From the Closet to the Altar: Courts, Backlash, and the Struggle for Same-Sex Marriage (Oxford University Press, 2012), by Michael J. Klarman. Here's a taste:


In From the Closet to the Altar, [Klarman] tells the remarkable story of the legal, political, and cultural struggle over marriage equality. But even as he chronicles the almost unheard-of progress on this issue in the past two decades, Klarman argues that each judicial advance has been met with a forceful political reaction, at substantial cost to gay rights and to liberal causes more generally.

Another highlight: Andrew Hacker's essay "How He Got It Right," in which he reviews The Signal and the Noise: Why So Many Predictions Fail—But Some Don’t (Penguin, 2012), by Nate Silver; The Physics of Wall Street: A Brief History of Predicting the Unpredictable (Houghton Mifflin Harcourt, 2013), by James Owen Weatherall; and Antifragile: Things That Gain from Disorder (Random House, 2012), by Nassim Nicholas Taleb.

In the New York Times, you'll find a review of A Man of Misconceptions: The Life of an Eccentricin in an Age of Change, by John Glassie (Riverhead Books, 2012). The "eccentricin" in question is "one of history’s more bizarre and largely forgotten thinkers, the 17th-century Jesuit priest Athanasius Kircher." 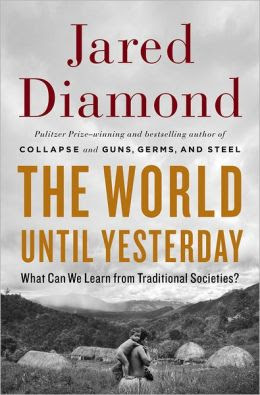 Also reviewed: The Barbarous Years: The Peopling of British North America: The Conflict of Civilizations, 1600-1675 (Alfred A. Knopf, 2012), by Bernard Bailyn (here).

And just for fun -- check out the NYT's slideshow of "favorite book cover designs of 2012."

A book making the rounds of the book pages this week is The World Until Yesterday:  What Can We Learn From Traditional Societies? (Viking, 2012), by Jared Diamond.  The Los Angeles Times reviews it here. The Guardian covers it here.  It is also featured in the Times Higher Education magazine this week, here, along with Becoming Right: How Campuses Shape Young Conservatives (Princeton University Press, 2013), by Amy J. Binder and Kate Wood, here.


From NPR: Listen to or read coverage of Detroit City Is the Place to Be: The Afterlife of an American Metropolis (Metropolitan Books, 2012), by Mark Binelli.
Posted by Karen Tani at 3:00 AM