The Winter 2013 issue of Democracy: A Journal of Ideas includes a book review by Mary Dudziak titled "Nations United? How the Idea of Global Governance Became a Resource of American Power." Dudziak reviews Mark Mazower, Governing The World: The History of an Idea (Penguin Press, 2012). Here are the first two paragraphs: 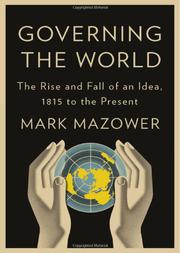 "Will there be “but one heart to the globe?” asks Walt Whitman in a poem that provides an epigraph in Mark Mazower’s new book, Governing the World: The History of an Idea. At the center of this expansive work is the question of how Americans and Europeans have imagined the world, its peoples, and its nations. Is there but one global identity, as Whitman surmises? Are the world’s peoples the focus of global politics, or should nations be privileged in international affairs? Do values and culture, or degrees of civilization, set nations apart? These questions inform global affairs over time. This history matters, Mazower argues, as “we find ourselves… in a hierarchical world in which some states are more sovereign than others.”

Power also matters: For Mazower, dominant nations come to play a role in defining the world. He embeds his narrative in the development of familiar institutions, such as the United Nations, and is especially compelling when he reveals lesser-known stories like the development of common units of measurement, presided over by social scientists in the West. This ambitious and largely convincing account falls short, however, when the author turns to contemporary matters. Disappointed that international law does not adequately constrain American war efforts, he misses an important turn in modern conflict: the way that law itself has been reimagined as a weapon of war.

The full review is available here.