These past few years I've developed more than a passing interest in Native American history. A section of a dissertation chapter turned into a book chapter (and soon, I hope, an article) about Native American efforts to claim state welfare benefits in the Southwest in the 1940s and 1950s. Because of this project, I deeply appreciate the great work being done at the intersection of Native American history and legal history, and I hunger for even more, especially on twentieth-century topics. 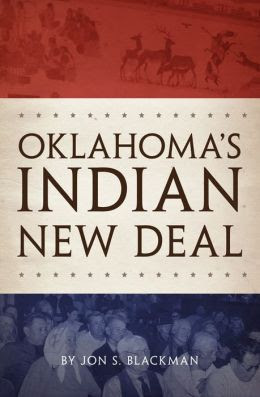 One avenue that scholars continue to explore is the impact of the "Indian New Deal" on particular people and places. Jon S. Blackman's new book, Oklahoma's Indian New Deal (University of Oklahoma Press), is in this vein. Cribbing now from the book's Amazon site:

Among the New Deal programs that transformed American life in the 1930s was legislation known as the Indian New Deal, whose centerpiece was the Indian Reorganization Act (IRA) of 1934. Oddly, much of that law did not apply to Native residents of Oklahoma, even though a large percentage of the country’s Native American population resided there in the 1930s and no other state was home to so many different tribes. The Oklahoma Indian Welfare Act (OIWA), passed by Congress in 1936, brought Oklahoma Indians under all of the IRA’s provisions, but included other measures that applied only to Oklahoma’s tribal population. This first book-length history of the OIWA explains the law’s origins, enactment, implementation, and impact, and shows how the act played a unique role in the Indian New Deal.

In the early decades of the twentieth century, white farmers, entrepreneurs, and lawyers used allotment policies and other legal means to gain control of thousands of acres of Indian land in Oklahoma. To counter the accumulated effects of this history, the OIWA specified how tribes could strengthen government by adopting new constitutions, and it enabled both tribes and individual Indians to obtain financial credit and land. Virulent opposition to the bill came from oil, timber, mining, farming, and ranching interests. Jon S. Blackman’s narrative of the legislative battle reveals the roles of bureaucrats, politicians, and tribal members in drafting and enacting the law.

Although the OIWA encouraged tribes to organize for political and economic purposes, it yielded mixed results. It did not produce a significant increase in Indian land ownership in Oklahoma, and only a small percentage of Indian households applied for OIWA loans. Yet the act increased member participation in tribal affairs, enhanced Indian relations with non-Indian businesses and government, promoted greater Indian influence in government programs—and, as Blackman shows, became a springboard to the self-determination movements of the 1950s and 1960s.

More information is available here.
Posted by Karen Tani at 8:00 AM