Chadwick on Prisoners, Spies and Deserters in WW1 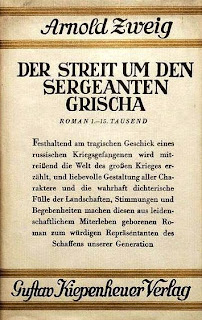 The article is a legal analysis of Zweig’s fictionalised account, published in 1927, of a true story which occurred in German occupied territory during World War 1. 'The Case of Sergeant Grischa' concerns a Russian prisoner of war who escapes his labour camp, is recaptured wearing the clothes of a dead German soldier, and subsequently tried and executed as a spy by German occupying forces, even though his true identity, status, and purpose in escape were by then known. In this examination, the very limits of law during ideological, industrialised warfare are illustrated by means of the repercussions on one man, who essentially is left alone to struggle against the breach of known, ‘civilised’ rules of warfare regarding the treatment of prisoners, spies and deserters.

The article considers Grischa’s case through the lens of the international laws of armed conflict in force at the time. First, the origin and evolution in the 19th and early 20th centuries of what is today known as the International Humanitarian Law of Armed Conflict are introduced, after which specific provisions of the Hague Conventions 1899 and 1907, and Geneva Conventions 1864 and 1906, as they applied to prisoners of war, are outlined. The customs and usages of war found in contemporaneous military manuals supply additional details regarding the acceptable treatment of spies and deserters, while the laws governing enemy occupied territory – on which Grischa was initially imprisoned, escaped, recaptured, tried and executed – form the backdrop. Most troublesome is the human element, as a high degree of ideological and socio-economic rivalry existed not only between the main German officers in charge of Grischa’s case, but between the enemy belligerents.