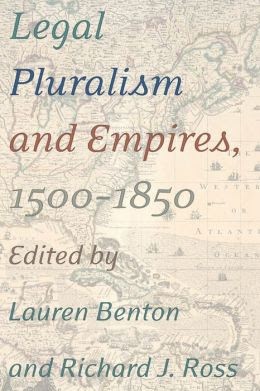 This wide-ranging volume advances our understanding of law and empire in the early modern world. Distinguished contributors expose new dimensions of legal pluralism in the British, French, Spanish, Portuguese, and Ottoman empires. In-depth analyses probe such topics as the shifting legal privileges of corporations, the intertwining of religious and legal thought, and the effects of clashing legal authorities on sovereignty and subjecthood. Case studies show how a variety of individuals engage with the law and shape the contours of imperial rule.

The volume reaches from Peru to New Zealand to Europe to capture the varieties and continuities of legal pluralism and to probe the analytic power of the concept of legal pluralism in the comparative study of empires. For legal scholars, social scientists, and historians, Legal Pluralism and Empires, 1500-1850 maps new approaches to the study of empires and the global history of law.


"This volume collects thoughtful and provocative essays on the legal complexities of empire, a subject that has been at the forefront of legal history in recent years. Whether one is interested in close studies of individual places or more wide-ranging explorations of the nature of legal pluralism in imperial contexts, this is the state of the art." -- Stuart Banner, Norman Abrams Professor of Law, UCLA

"Legal pluralism has rapidly become one of the most fertile concepts among early modern historians. The richly documented and subtly argued essays in this collection amply exhibit its power to illuminate and complexify understandings of a variety of empires: Ottoman, British, French, and Spanish. As both a compendium of cutting-edge work and a blueprint for future research, the volume should inspire historians of other empires and other periods to add legal pluralism to their analytical armory." -- David Armitage, Harvard University

"Historians of law and historians of empire alike will derive new insights from this impressive collection of discerning synthetic essays and rich case studies of the diversity of legal systems as European empires (including the Ottomans) claimed sovereignty over territories and peoples around the world. These scholars offer methodological and conceptual models that will push the field forward in new directions." -- Sarah Chambers, University of Minnesota

The Introduction and Table of Contents are available here.
Posted by Karen Tani at 8:00 AM