New Release: Onwuachi-Willig, "According to Our Hearts: Rhinelander v. Rhinelander and the Law of the Multiracial Family" 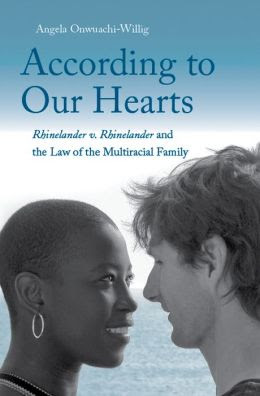 New from Yale University Press: Angela Onwuachi-Willig, According to Our Hearts: Rhinelander v. Rhinelander and the Law of the Multiracial Family (2013). Here's the Press's description:


This landmark book looks at what it means to be a multiracial couple in the United States today. According to Our Hearts begins with a look back at a 1925 case in which a two-month marriage ends with a man suing his wife for misrepresentation of her race, and shows how our society has yet to come to terms with interracial marriage. Angela Onwuachi-Willig examines the issue by drawing from a variety of sources, including her own experiences. She argues that housing law, family law, and employment law fail, in important ways, to protect multiracial couples. In a society in which marriage is used to give, withhold, and take away status—in the workplace and elsewhere—she says interracial couples are at a disadvantage, which is only exacerbated by current law.

One of of the blurbs on the book's webpage comes from our very own Tomiko Brown-Nagin:


"According to Our Hearts is a fascinating—and sobering—account of interracial relationships in America. Onwauchi-Willig persuasively argues that the “mono-racial” family remains the social and legal standard by which all others are measured. Anyone interested in race, gender and the law will find the book an absorbing and enlightening read."

More information is available here. It looks like excerpts and the TOC will be available soon.
Posted by Karen Tani at 12:30 AM