Hyde on Law and Architecture in Prerevolutionary Cuba

Timothy Hyde, an Associate Professor of Architecture in Harvard University’s Graduate School of Design, has just published Constitutional Modernism: How Architecture, Law, and Urbanism Shaped the Premises of Civil Society in Cuba.  The publisher, the University of Minnesota Press, explains: 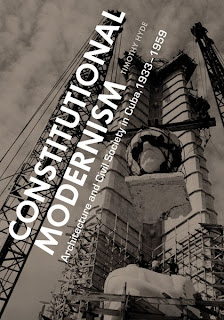 Constitutional Modernism explores architecture, planning, and law as cultural forces, analyzing the complex entanglements between these disciplines in the Cuban Republic. Timothy Hyde reveals how architects joined with other professionals and intellectuals in efforts to establish a stable civil society, from the promulgation of a new Cuban Constitution in 1940 up until the Cuban Revolution.


This is a major book on Cuba. It is the best history of modern Havana ever written, unlikely to be surpassed. Timothy Hyde is a thorough, scrupulous historian with a sophisticated grasp of architectural history and theory, as well as of the political and artistic history of Cuba. He chronicles in dramatic detail the vigorous debates around the question of cubanidad that led to the proclamation of the 1940 constitution, and to the formulation and execution of plans for the development of Havana: its plazas, boulevards, public buildings, and monuments. These deliberations, which included prominent intellectuals such as Fernando Ortiz and Jorge Mañach, came to an end with the advent of Castro’s regime.