Essays on American Statebuilding from Reconstruction to the New Deal

Out this month from the University of Pennsylvania Press is Statebuilding from the Margins: Between Reconstruction and the New Deal, edited by Carol Nackenoff and Julie Novkov.  It is a volume in the American Governance: Politics, Policy, and Public Law series.  Contributors are James Greer, Carol Nackenoff, Julie Novkov, Susan Pearson, Kimberly Smith, Marek D. Steedman, Patricia Strach, Kathleen Sullivan, Ann-Marie Szymanski. 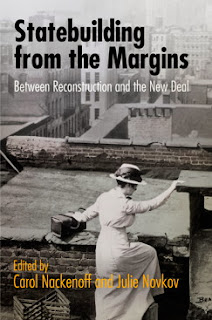 The period between the Civil War and the New Deal was particularly rich and formative for political development. Beyond the sweeping changes and national reforms for which the era is known, Statebuilding from the Margins examines often-overlooked cases of political engagement that expanded the capacities and agendas of the developing American state. With particular attention to gendered, classed, and racialized dimensions of civic action, the chapters explore points in history where the boundaries between public and private spheres shifted, including the legal formulation of black citizenship and monogamy in the postbellum years; the racial politics of Georgia's adoption of prohibition; the rise of public waste management; the incorporation of domestic animal and wildlife management into the welfare state; the creation of public juvenile courts; and the involvement of women's groups in the creation of U.S. housing policy. In many of these cases, private citizens or organizations initiated political action by framing their concerns as problems in which the state should take direct interest to benefit and improve society.

Statebuilding from the Margins depicts a republic in progress, accruing policy agendas and the institutional ability to carry them out in a nonlinear fashion, often prompted and powered by the creative techniques of policy entrepreneurs and organizations that worked alongside and outside formal boundaries to get results. These Progressive Era initiatives established models for the way states could create, intervene in, and regulate new policy areas—innovations that remain relevant for growth and change in contemporary American governance.

"An engaging and original contribution to our understanding of a critical period in American political development. By surveying a range of different policy domains within a single historical era, these essays effectively catalogue the multiple ways in which private citizens and associations leveraged and augmented the scope of state intervention."—Elizabeth Clemens, University of Chicago

"The Progressive Era remains as controversial as it is vital for understanding the contemporary United States. Carol Nackenoff and Julie Novkov have orchestrated a set of rich, detailed and evocative studies on themes ranging from prohibition, urban government, environmentalism, housing and juvenile justice that together make for a highly original contribution to our understanding of twentieth-century America."—Daniel Carpenter, Harvard University
Posted by Dan Ernst at 12:30 AM