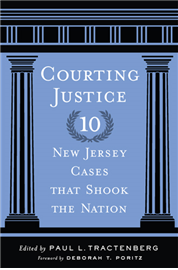 Safety recalls, child-safe toys, and other consumer safety protections are taken for granted today, but there was a time not so long ago when everyday products were dangerous and consumers who were injured by cars, toys, or other products faced a difficult road to recover compensation from manufacturers. About fifty years ago all of this changed, drastically and in a short period of time. The catalyst for this dramatic change was an unlikely source — a woman from Keansburg, New Jersey, who was injured when her new Plymouth sedan suddenly veered into a brick wall. When she initially sued the dealer who had sold her the car and Chrysler, the manufacturer, the state of the law posed roadblocks to her recovery. The New Jersey Supreme Court recognized that change was needed and issued an opinion — Henningsen v. Bloomfield Motors, Inc. — that quickly would change the world of products liability and consumer protection.

This article . . tells the story of the facts that gave rise to Henningsen, the arguments in the courts, and the case’s role in the development of products.

After the jump: the TOC for Courting Justice

3. Southern Burlington County NAACP v. Township of Mount Laurel (1975): Establishing a Right to Affordable Housing Throughout the State by Confronting the Inequality Demon

4. In Re Karen Ann Quinlan (1976): Establishing a Patient's Right to Die in Dignity

7. In the Matter of Baby M (1988): Reining in Surrogate Parenting and Defining Children's Best Interests

9. Doe v. Poritz and Megan's Law (1995): The Subtle Art of Judicial Deference to the Legislature

Conclusion: New Jersey's 1947 Constitution and the Creation of a Modern State Supreme Court