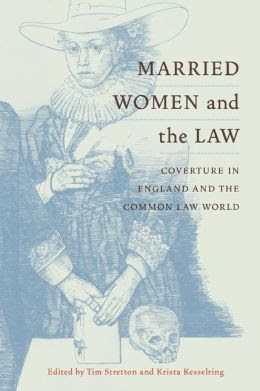 Via the Canadian Legal History Blog, we have word that McGill-Queen's University Press has published Married Women and the Law: Coverture and the Common Law World, edited by Tim Stretton (Saint Mary's University) and Krista J. Kesselring (Dalhousie University). The Press describes the book as follows:


Explaining the curious legal doctrine of "coverture," William Blackstone famously declared that "by marriage, husband and wife are one person at law." This "covering" of a wife's legal identity by her husband meant that the greatest subordination of women to men developed within marriage. In England and its colonies, generations of judges, legislators, and husbands invoked coverture to limit married women's rights and property, but there was no monolithic concept of coverture and their justifications shifted to fit changing times: Were husband and wife lord and subject? Master and servant? Guardian and ward? Or one person at law?

The essays in Married Women and the Law offer new insights into the legal effects of marriage for women from medieval to modern times. Focusing on the years prior to the passage of the Divorce Acts and Married Women's Property Acts in the late nineteenth century, contributors examine a variety of jurisdictions in the common law world, from civil courts to ecclesiastical and criminal courts. By bringing together studies of several common law jurisdictions over a span of centuries, they show how similar legal rules persisted and developed in different environments. This volume reveals not only legal changes and the women who creatively used or subverted coverture, but also astonishing continuities.Accessibly written and coherently presented, Married Women and the Law is an important look at the persistence of one of the longest lived ideas in British legal history.


“Married Women and the Law makes a significant contribution to conceptualizing coverture’s ever changing impact on women and families and each chapter is interesting and provocative in its own right.” -- Amy Froide

“A much needed and powerful study of married women’s status in law.” -- Joanne Bailey