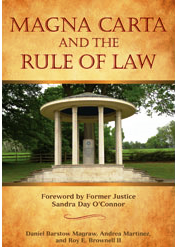 Roman and canon law — collectively called the ius commune in the Middle Ages — certainly made their mark on Magna Carta, but this paper argues that the elements of the ius commune that found their way into Magna Carta were inserted not to influence the early development of the common law, as many scholars have assumed, but rather because ius commune, and more particularly canon law, was a political language that appealed to various important constituencies in England and abroad. Appeals to canon law in Magna Carta were more likely placed there to elicit support from the papacy than to reform English law. This paper places Magna Carta in the longer context of the Church reform movement and its instantiation in England — the Becket dispute — and argues that Magna Carta’s ius commune-influenced provisions were attempts by English actors to give universal significance to their local disputes.