New Release: Hill on "The Life of Grenville Clark"

New from the University of Missouri Press: A Very Private Public Citizen: The Life of Grenville Clark, by Nancy Peterson Hill (Diastole Scholars’ Center). A description from the Press: 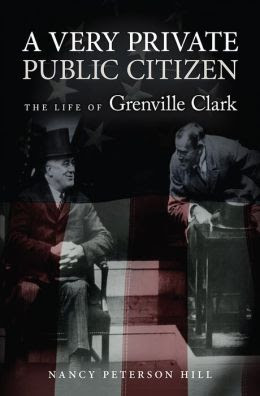 Grenville Clark was born to wealth and privilege in Manhattan, where his maternal grandfather, LeGrand Bouton Cannon, was an industry titan, retired Civil War colonel, and personal friend of Abraham Lincoln. Clark grew up on a first-name basis with both Presidents Roosevelt, and his close friends included Supreme Court justices. He was well known and respected in the inner circles of business, government, and education. In A Very Private Public Citizen: The Life of Grenville Clark, Nancy Peterson Hill gives life to the unsung account of this great and largely anonymous American hero and reveals how the scope of Clark’s life and career reflected his selfless passion for progress, equality, and peace.

As a member of the “Corporation,” Harvard’s elite governing board, Clark wrote a still-relevant treatise on academic freedom. He fought a successful public battle with his good friend President Franklin Roosevelt over FDR’s attempt to “pack” the Supreme Court in 1937. He refused pay while serving as a private advisor for the Secretary of War of the United States during the Second World War, and he worked closely with the NAACP to uphold civil rights for African Americans during the tumultuous 1950s and ‘60s. Clark devoted his last decades to a quest for world peace through limited but enforceable world law, rewriting the charter of the United Nations and traveling the globe to lobby the world’s leaders.

An enthusiastic husband, father, and friend, Clark was a lawyer, civil rights activist, traveler, advisor, and world citizen at large. Memories from Clark’s family and friends weave through the book, as do Clark’s own inimitable observations on his life and the world in which he lived. A Very Private Public Citizen brings Clark out of the shadows, offering readers an inspiring example of a true patriot and humanitarian, more concerned with the well-being of his country and his fellow man than with his own fame.

More information is available here.
Posted by Karen Tani at 9:00 AM