A Festschrift for Richard H. Helmholz

I’m very pleased to note the publication of the festschrift Studies in Canon Law and Common Law in Honor of R. H. Helmholz, edited by Troy L. Harris (Berkeley: The Robbins Collection, 2015).  “Richard Helmholz is a scholar, mentor and gentleman,” writes the editor, Troy L Harris.  Although “perhaps best known as an historian of the Roman canon law in medieval and early modern England,” Professor Helmholz “has an enviable knack for addressing a variety of subjects–from the history of marriage law to the work of ecclesiastical courts to the prohibition against self-incrimination–with sophistication and rigor, while keeping a light touch and remaining accessible.”  And because his interests lie “at the intersection of multiple lines of inquiry, his contributions are recognized by historians whose paths might otherwise never cross: historians of Roman civil law, of English common law, of medieval and early modern European law, of medieval and early modern English society.”  The contents of festschrift attest to Professor Helmholz’s influence, Harris writes, but may not sufficiently reveal “the genuine affection and admiration” that the contributors “expressed toward our mutual friend.” 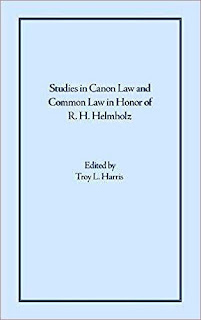 Ethical Standards for Advocates and Proctors of the Court of Ely (1374-1382) Revisited
Charles Donahue, Jr.

The Evolution of the Common Law
Thomas P. Gallanis

The Presumption of Evil in Medieval Jurisprudence
Laurent Mayali

The Durability of Maxims in Canon Law: From regulae iuris to Canonical Principles
Norman Doe and Simon Pulleyn