Blumenthal's "Law and the Modern Mind"

Just out from Harvard University Press is Law and the Modern Mind: Consciousness and Responsibility in American Legal Culture, by Susanna L. Blumenthal, Professor of Law and Associate Professor of History at the University of Minnesota: 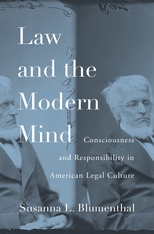 In postrevolutionary America, the autonomous individual was both the linchpin of a young nation and a threat to the founders’ vision of ordered liberty. Conceiving of self-government as a psychological as well as a political project, jurists built a republic of laws upon the Enlightenment science of the mind with the aim of producing a responsible citizenry. Susanna Blumenthal probes the assumptions and consequences of this undertaking, revealing how ideas about consciousness, agency, and accountability have shaped American jurisprudence.

Focusing on everyday adjudication, Blumenthal shows that mental soundness was routinely disputed in civil as well as criminal cases. Litigants presented conflicting religious, philosophical, and medical understandings of the self, intensifying fears of a populace maddened by too much liberty. Judges struggled to reconcile common sense notions of rationality with novel scientific concepts that suggested deviant behavior might result from disease rather than conscious choice. Determining the threshold of competence was especially vexing in litigation among family members that raised profound questions about the interconnections between love and consent. This body of law coalesced into a jurisprudence of insanity, which also illuminates the position of those to whom the insane were compared, particularly children, married women, and slaves. Over time, the liberties of the eccentric expanded as jurists came to recognize the diversity of beliefs held by otherwise reasonable persons.

In calling attention to the problematic relationship between consciousness and liability, Law and the Modern Mind casts new light on the meanings of freedom in the formative era of American law.

“This book is an unrivaled synthesis of the legal history of moral responsibility and mental capacity. No one has managed to connect so effectively the particulars of legal judgment of mental capacity—rendered by Blumenthal in a subtle and nuanced manner—with broader religious and cultural changes. She writes beautifully, and even more impressively, she discusses complex and sometimes abstruse doctrines with clarity and precision.”—Morton J. Horwitz, Harvard Law School

“Susanna Blumenthal’s Law and the Modern Mind is an extensive and exquisitely detailed journey through a long overlooked corner of nineteenth-century jurisprudence in America. It is based on years of reading across an impressive array of ornate and largely arcane texts. The author’s capacity to render it into coherent analysis is even more impressive.”—Sarah Barringer Gordon, University of Pennsylvania Law School

“Susanna Blumenthal is distinctive among legal historians of her generation. She brings to her work wide and thoughtful reading in various technical fields—the history of philosophy, the history of psychology, and American and English legal history—and has an immense gift for synthesis and summation. The book is an extraordinary achievement that helps to define the meaning of private law in the nineteenth-century judicial imagination.”—Hendrik Hartog, Princeton University
Posted by Dan Ernst at 11:00 AM