Charles Gardner Geyh, the John F. Kimberling Professor of Law at the Indiana University Maurer School of Law, has published Courting Peril: The Political Transformation of the American Judiciary, with Oxford University Press. 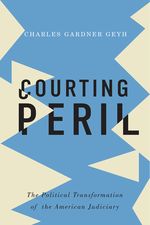 The rule of law paradigm has long operated on the premise that independent judges disregard extralegal influences and impartially uphold the law. A political transformation several generations in the making, however, has imperiled this premise. Social science learning, the lessons of which have been widely internalized by court critics and the general public, has shown that judicial decision-making is subject to ideological and other extralegal influences. In recent decades, challenges to the assumptions underlying the rule of law paradigm have proliferated across a growing array of venues, as critics agitate for greater political control of judges and courts. With the future of the rule of law paradigm in jeopardy, this book proposes a new way of looking at how the role of the American judiciary should be conceptualized and regulated. This new, "legal culture paradigm" defends the need for an independent judiciary that is acculturated to take law seriously but is subject to political and other extralegal influences. The book argues that these extralegal influences cannot be eliminated but can be managed, by balancing the needs for judicial independence and accountability across competing perspectives, to the end of enabling judges to follow the "law" (less rigidly conceived), respect established legal process, and administer justice.

TOC after the jump: