In Madam Chief Justice, editors W. Lewis Burke Jr. and Joan P. Assey chronicle the remarkable career of Jean Hoefer Toal, South Carolina's first female Supreme Court Chief Justice. As a lawyer, legislator, and judge, Toal is one of the most accomplished women in South Carolina history. In this volume, contributors, including a former and current U. S. Supreme Court justice, federal and state judges, state leaders, historians, legal scholars, leading attorneys, family, and friends, provide analysis, perspective, and biographical information about the life and career of this dynamic leader and her role in shaping South Carolina. 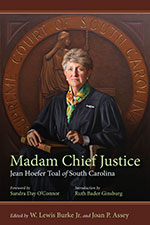 Growing up in Columbia during the 1950s and 60s, Jean Hoefer was a youthful witness to the civil rights movement in the state and nation. Observing the state's premier civil rights lawyer Matthew J. Perry Jr. in court encouraged her to attend law school, where she met her husband, Bill Toal. When she was admitted to the South Carolina Bar in 1968, fewer than one hundred women had been admitted in the state's history. From then forward she has been both a leader and a role model. As a lawyer she excelled in trial and appellate work and won major victories on behalf of Native Americans and women. In 1975 Toal was elected to the South Carolina House of Representatives and despite her age and gender quickly became one of the most respected members of that body. During her fourteen years as a House member, Toal promoted major legislation on issues including constitutional law, criminal law, utilities regulation, local government, state appropriations, workers compensation, and freedom of information.


In 1988 Toal was sworn in as the first female justice on the Supreme Court of South Carolina, where she made her mark through her preparation and insight. She was elected chief justice in 2000, becoming the first woman ever to hold the highest position in the state's judiciary. As chief justice, Toal not only modernized her court, but also the state's judicial system. As Toal's two daughters write, the traits their mother brings to her professional life—exuberance, determination, and loyalty—are the same traits she demonstrates in her personal and family life. As a child Toal loved roller skating in the lobby of the post office, a historic building that now serves as the Supreme Court of South Carolina. From a child in Columbia to madam chief justice, she has come full circle.