Goluboff on "Vagrant Nation" on PBS 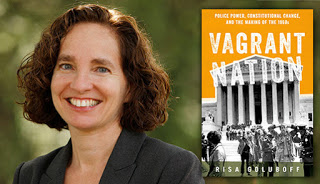 [This Sunday many PBS stations will air the latest episode of the Miller Center for Public Affairs’ American Forum series, this one with Risa Goluboff on her new book, Vagrant Nation.  Go here to “view Goluboff on how vagrancy laws made it ‘a crime to be poor and idle’” and here  to “see Goluboff discuss “when hippies get arrested.’”]

On the Next American Forum: Taming Police Power and The Making of the 1960s

No domestic issue has been more dramatically at the center of American public discussion in recent years than the interplay between police practices, civil rights and racial unrest. At its heart is an age-old tension over just how much discretion the police should have over who they can stop for questioning, and under what circumstances citizens can be detained. Our guest in this American Forum is Risa Goluboff, a distinguished professor of Law and History and the next dean of the University of Virginia School of Law. Her most recent book probes a shadowy part of our past: How laws aimed at criminalizing hobos and beggars became an instrument for massive abuse of police power—and how those laws were quietly dismantled by the U.S. Supreme Court in the 1960s and 1970s. It’s a legal history with deep implications for our current national debate. Her book is Vagrant Nation: Police Power, Constitutional Change, and the Making of the 1960s.

Goluboff discusses the origins of vagrancy laws saying you could be “convicted for being a kind of person, which means you can be arrested on site at any moment…they come to be used for preventive policing…they come to be used against racial minorities, religious minorities, gay men and lesbians, beatniks and hippies, women and prostitutes, so anybody who seems at all out of place in any way becomes a target of vagrancy laws.”

American Forum broadcasts nationally on over 80% of Public Television stations (check local listings here). This episode will air on stations in Virginia on Sunday, March 13 at 10:30am or 1:00pm, and broadcast nationally on most PBS "WORLD Channel" stations at 7:30am and 1:30pm on Wednesday, March 16.
Posted by Dan Ernst at 2:44 PM