Out since August with Cambridge University Press is Death in Beijing: Murder and Forensic Science in Republican China by Daniel Asen, Rutgers Newark. 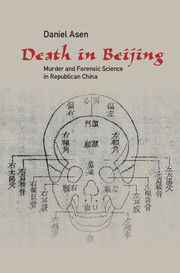 In this innovative and engaging history of homicide investigation in Republican Beijing, Daniel Asen explores the transformation of ideas about death in China in the first half of the twentieth century. In this period, those who died violently or under suspicious circumstances constituted a particularly important population of the dead, subject to new claims by police, legal and medical professionals, and a newspaper industry intent on covering urban fatality in sensational detail. Asen examines the process through which imperial China's old tradition of forensic science came to serve the needs of a changing state and society under these dramatically new circumstances. This is a story of the unexpected outcomes and contingencies of modernity, presenting new perspectives on China's transition from empire to modern nation state, competing visions of science and expertise, and the ways in which the meanings of death and dead bodies changed amid China's modern transformation.

Table of Contents after the jump.
Introduction

1. Suspicious deaths and city life in Republican Beijing
2. On the case with the Beijing procuracy
3. Disputed forensics and skeletal remains
4. Publicity, professionals, and the cause of forensic reform
5. Professional politics of a crime scene
6. Dissection and its discontents
7. Legal medicine during the Nanjing decade
Conclusion: a history of forensic modernity

More information is available here.
Posted by Mitra Sharafi at 9:00 AM