[We’re grateful to Sarah Barringer Gordon (Penn) and John Wertheimer (Davidson) for this report on the 2016 ASLH Student Research Colloquium, which was held on Thursday, October 27, 2016 in conjunction with the ASLH’s annual meeting in Toronto.] 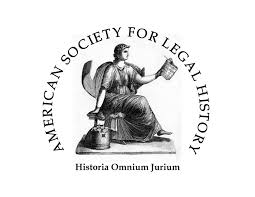 The papers opened with Catherine Baylin Duryea's "Practicing Human Rights in the Arab World" International Law in 20th Century Advocacy." Catherine (Stanford), whose study of Arab NGOs in the late 1970 and across the 1980s, uncovers the important work in the law of international human rights.  Al Haq, founded by three western-educated Palestinians, documented and publicized the Israeli military occupation in ways that became important invocations of legal standards that Israel had agreed to observe.  The paper relies in part on the oral histories of activists, and also will focus on the insider/outsider status of the activists as well as situating the work within the longer history of NGOs in Palestine.

The second session shifted us to the rights of parents to control the education of their children, crystalized in the U.S. Supreme Court case Pierce v. Society of Sisters  (1925).  Julia Bowes (Rutgers) "A Strange Perversion in the Meaning of the World 'Liberty': Pierce and the Invention of Fundamental Family Liberties" focuses on the lawyers and judges who built a new limits on states' ability to compel public education, connecting the story to child labor laws and late-nineteenth century constitutional jurisprudence.  The conservative arguments against Oregon's public school law channeled traditional notions of substantive due process into new frames, arguing for parental sovereignty against government.

Sam Davis (Temple) turned the group's attention to removal and colonization movements in Ohio, from 1815 through 1870 in "Black Law and Colonization in Antebellum Ohio."  Davis discusses Ohio's Black Laws, which disenfranchised and sharply discriminated against free black residents of the state.  He pairs this focus with Ohio's version of colonization as a cure for African American "debasement" and "degradation."  Sam connects the Black Laws directly to degradation, a problem created by the discrimination not a justification of it.  His study of the Old Northwest includes Indiana and Illinois, but this chapter on African Americans in Ohio probes the depth of connections between legal disability, race, and identity, and state formation.

"Inside and Out of Doors: Constitutional Life and Learning," Aaron Hall's paper on popular constitutionalism in antebellum America, explores popular constitutional debates in a variety of unexpected forums, including young men's debating societies. In didactic literature and public discourse, Aaron (Berkeley) finds paired belief in the sanctity of the Constitution and in the authority of its framers over meaning. His work traces this investment in the Constitution especially in debates over slavery, which featured a shared reverence for the Founding but diametrically opposed beliefs around the interpretation of the document and the commitments of its authors.

Elizabeth Lhost's "The Making of a Marital Fact: Documentary Practices of a North Indian Qazi" surveys a late colonial collection of Muslim marriage registers produced by a family of Muslim judges in north India.  Lhost (Chicago) treats these marriage registers as a form of documentary technology that created, as much as recorded, marital "facts."  By highlighting new forms of legal writing, document production, and professionalization among Muslim judges, she illuminates the effects of bureaucratization on local legal practice.  Her project brings together observations on the importance of paperwork in the extension of British imperial power with a critical understanding of the role print technologies played in Islamic reform within India.

Scott McDowell (Minnesota) presented "The Arithmetic of Sovereignty: Law, Violence, Policing and the Construction of Capitalism in the Nineteenth-Century United States." He uses the Lattimer Massacre, a labor dispute that led to the deaths of nineteen immigrant coal miners, to explore diplomacy, law, and capitalism.  The workers killed at Lattimer were subjects of Austria-Hungary, which demanded that the U.S. pay an indemnity.  The U.S. refused.  The request and the refusal highlight the importance of the global stage to the construction of American capitalism, when employers relied on foreign laborers and benefited from their legal vulnerability.

Lael Weinberger (Chicago) turned the group's attention to "Internationalism in the American Legal Profession, 1917-1953."  His paper explores how the American bar changed its views on international law , and finds widespread enthusiasm for legal internationalism in the conservative American bar of the interwar period.  The bar's support fluctuated during the 1930s and the war years, then evaporated in the Cold War, amid debates concerning the Universal Declaration of Human Rights in 1947-48.  Human rights, he concludes, were a key component of the rise of conservative legal attitudes toward international law in postwar and Cold War debates.

Finally, Sarah Winsberg (Penn) presented "Making Work: Lawyers and the Boundaries of Labor, 1780-1860."  Winsberg examines gradual changes in the law of hiring, slavery, marriage, and corporations, arguing that legal writers incrementally distinguished the concept of work from its supposed opposites.  She treats early U.S. legal writers, whose work deployed both English and American precedent, as categorizers of a changing world of labor who invented new categories for hired labor and simultaneously transformed the laws of slavery, marriage, and business organization, newly defining those subjects in decidedly non-labor terms.

The discussions were serious, productive, and tons of fun.  The future of legal history looks bright.
Posted by Dan Ernst at 9:30 AM