The Birth of the Blog

On November 27, 2006, at a kitchen table in Sharon, Massachusetts, the Legal History Blog was born. The first post was a simple hello, announcing the blog to come.

The next posts appeared with the sort of fare LHB readers have come to expect: posts about new SSRN papers, a call for papers, news about a new book and an honor bestowed on legal historian Morty Horwitz. The very first person to comment on the blog was legal historian Al Brophy, who is also a blogger. Readership began with a handful of visitors, and then built steadily as more of you came along.

In honor of LHB’s 10th anniversary, I thought I would tell you the story of LHB’s early days when I created the blog at my kitchen table. It is a story about how social media can enhance a field, and it is also a personal story about the way the blog mattered to my life as a scholar.

I began the Legal History Blog on my own after a couple of legal historians I’d asked to join me were too busy. Going it alone was a little terrifying, but had some advantages. I could give the blog the sort of tone and content that I thought it needed, and I hoped this would help LHB establish a readership. One important model for the blog was Lawrence Solum’s Legal Theory Blog devoted solely to posts about scholarship. Another model was History News Network and similar sites with news of the field and occasional opinion pieces. This sort of blogging was sustainable because it didn’t rely on a steady stream of original essays.

LHB was warmly welcomed into the law and history blogospheres. But sometimes fellow legal historians seemed surprised that I would devote time to blogging and wondered why on earth I did it. I started the blog because I felt that the field of legal history needed a more dynamic online presence. Scholars in other fields often had an outdated and narrow understanding of what legal historians did. I wanted to show that we weren’t antiquarians of formal law, and to illustrate the ways legal historians draw upon all the rich methodologies employed by others. Legal historians have long focused on social and intellectual history. I wanted to create a space that also emphasized transnational and comparative legal history and the sort of work that now falls within the field of the United States and the World. I hoped the blog would help scholars connect with each other and would bring new readers for the works posted about.

Although I created the blog because I thought legal history needed it, LHB also turned out to be very good for me. I was on leave in the fall of 2006 with a fellowship from the American Council on Learned Societies to complete my book on Thurgood Marshall’s work in Africa. I found a creative way to “top off” that fellowship: my daughter and I moved in with my then-boyfriend (hence the blog’s Sharon, MA birthplace). We all long for those stretches of time for writing that come only with a leave, and the isolation of Sharon – way out in the Boston suburbs – helped me protect my writing time. But writing is not always exhilarating. Sometimes I would get to the end of the day with little more than a paragraph – and then I would delete it. On days when the writing made me feel worthless, the blog was something of a savior. There were visitors! People from around the country and the world were reading my posts. Social media can be a distraction, but especially in the blog’s first year, LHB was sustenance. It made me feel connected to a broader world of readers. That audience kept me going.

Continued below the fold.
Another way that LHB enhanced my scholarly work was that it gave me a place to try out new ideas. In reviewing old posts, I was surprised to see a post from November 2006 that I had forgotten about. It was titled What is a War Time? Six years later I published a book addressing that question.

Although much remains the same at LHB, the blog was a little sillier in the old days. When I needed a blog break, I would leave readers in the company of my dog Frank. 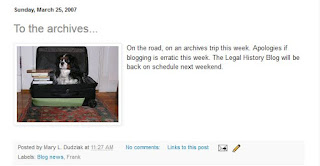 The silliest and the most elaborate day of posting was LHB’s first April Fool’s Day. Legal historian John Fabian Witt and law and econ scholar Eric Talley collaborated with me on a post In disturbing new study, Economists find that History is Inefficient. Another popular entry was a faux book review written by Mark Graber of Samuel Blatchford: Not an Ordinary Justice.  A librarian contacted me, wanting to order the book, but she was unable to find Brown University Press (which, of course, doesn’t exist).

Other scholars began joining me as guests in 2008, starting with Al Brophy, Richard Ross and Dan Ernst, and Dan signed on as as the first ongoing co-blogger later that year. Tomiko-Brown Nagin, Karen Tani, and more recently Mitra Sharafi also joined the LHB blogging team. Clara Altman came on board as our first Facebook coordinator, followed by Emily Prifogle, and LHB now has Associate Bloggers Brooke Depenbusch and Smita Ghosh. Then, after six years, in 2012 I gave the blog away to my co-bloggers. I had new duties, and a new online space to create as I chaired the Web Committee for the Society for Historians of American Foreign Relations (an organization that I will serve as President in 2017).

In the meantime, my Thurgood Marshall book was finished on time, and another followed. I married the boyfriend and then moved to Atlanta and Emory Law School. Frank, LHB's first dog, is still going strong and occasionally appears on Twitter. I now read LHB as a visitor. It is a little bittersweet – sort of like visiting a home you once owned. But the success of the blog over the years and across the globe has been so much greater than I could have hoped for. So I remember the blog with gratitude to Dan, Karen, Mitra, Brooke and Smita, and to all the guest bloggers, for your continuing presence.

And especially, I am grateful to you, gentle readers. It is because of you that the blog took off in the first place, and you are the reason it is still here ten years later.
Posted by Mary L. Dudziak at 7:00 AM