Each month the University of Chicago Press offers a free e-book.  November’s is Segregation: A Global History of Divided Cities, by Carl H. Nightingale, University at Buffalo, State University of New York: 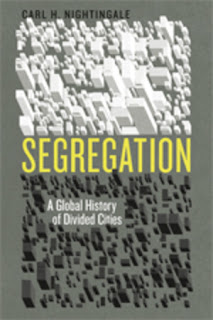 When we think of segregation, what often comes to mind is apartheid South Africa, or the American South in the age of Jim Crow—two societies fundamentally premised on the concept of the separation of the races. But as Carl H. Nightingale shows us in this magisterial history, segregation is everywhere, deforming cities and societies worldwide.

Starting with segregation’s ancient roots, and what the archaeological evidence reveals about humanity’s long-standing use of urban divisions to reinforce political and economic inequality, Nightingale then moves to the world of European colonialism. It was there, he shows, segregation based on color—and eventually on race—took hold; the British East India Company, for example, split Calcutta into “White Town” and “Black Town.” As we follow Nightingale’s story around the globe, we see that division replicated from Hong Kong to Nairobi, Baltimore to San Francisco, and more. The turn of the twentieth century saw the most aggressive segregation movements yet, as white communities almost everywhere set to rearranging whole cities along racial lines. Nightingale focuses closely on two striking examples: Johannesburg, with its state-sponsored separation, and Chicago, in which the goal of segregation was advanced by the more subtle methods of real estate markets and housing policy.

For the first time ever, the majority of humans live in cities, and nearly all those cities bear the scars of segregation. This unprecedented, ambitious history lays bare our troubled past, and sets us on the path to imagining the better, more equal cities of the future.