Hussin on Politics of Islamic Law

Out with the University of Chicago Press is The Politics of Islamic Law: Local Elites, Colonial Authority, and the Making of the Muslim State by Iza Hussin, University of Cambridge. From the publisher: 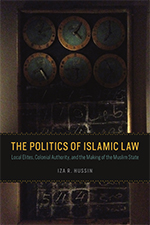 In The Politics of Islamic Law, Iza Hussin compares India, Malaya, and Egypt during the British colonial period in order to trace the making and transformation of the contemporary category of "Islamic law." She demonstrates that not only is Islamic law not the shari’ah, its present institutional forms, substantive content, symbolic vocabulary, and relationship to state and society—in short, its politics—are built upon foundations laid during the colonial encounter.

Drawing on extensive archival work in English, Arabic, and Malay—from court records to colonial and local papers to private letters and visual material—Hussin offers a view of politics in the colonial period as an iterative series of negotiations between local and colonial powers in multiple locations. She shows how this resulted in a paradox, centralizing Islamic law at the same time that it limited its reach to family and ritual matters, and produced a transformation in the Muslim state, providing the frame within which Islam is articulated today, setting the agenda for ongoing legislation and policy, and defining the limits of change. Combining a genealogy of law with a political analysis of its institutional dynamics, this book offers an up-close look at the ways in which global transformations are realized at the local level.

“The Politics of Islamic Law takes a very fresh approach on understanding the roots of modern Islamic laws. It is a very well-researched and well-argued work. This book is a must-read for the students and experts of Islamic law. Since Hussin has traced the roots of Islamic laws in the colonial state and polices instead of Islamic theology and history, it may raise controversies. However, it is not possible to ignore this scholarly work.” –Washington Book Review

“This book is the work of a gifted scholar with the capacity to work painstakingly through a mass of detail, do comparative work in multiple locations, and draw significant theoretical conclusions. Detailing a genealogy of Islamic law and ‘mixed’ Islamic legal regimes, Hussin offers a sophisticated analysis that places these in the context of colonization and outlines the ways they have been shaped by an ongoing engagement between colonial powers and local elites.” –Mahmood Mamdani

“The Politics of Islamic Law is a remarkable book, both for its breadth and lucidity. The archive that Hussin plumbs is vast (Malaya, India, Egypt) and her analysis sharp. In clear prose she shows the various ways in which British colonial rule transformed Islamic law to fit the requirements of the modern state. This is an important contribution that unsettles a number of assumptions about Islamic law and its modern history.” –Saba Mahmood

More information is available here.
Posted by Mitra Sharafi at 12:30 AM