New from HeinOnline: Slavery in America and the World

Check out the on-line collection Slavery in America and the World: History, Culture & Law, prepared by HeinOnline under the general editorship of Paul Finkelman.  Global access is free. 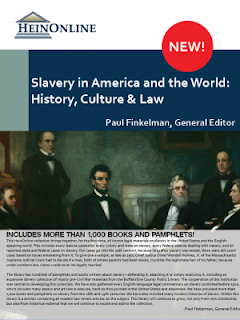 This HeinOnline collection brings together, for the first time, all essential legal materials on slavery in the United States and the English-speaking world. This includes every statute passed by every colony and state on slavery, every federal statute dealing with slavery, and all reported state and federal cases on slavery. Our cases go into the 20th century, because long after slavery was ended, there were still court cases based on issues emanating from slavery. To give one example, as late as 1901 Chief Justice Oliver Wendell Holmes, Jr. of the Massachusetts Supreme Judicial Court had to decide if a man, both of whose parents had been slaves, could be the legitimate heir of his father, because under southern law, slaves could never be legally married. The library has hundreds of pamphlets and books written about slavery—defending it, attacking it or simply analyzing it, including an expansive slavery collection from Buffalo Erie County Public Library. The cooperation of this institution was central to developing this collection. We have also gathered every English-language legal commentary on slavery published before 1920, which includes many essays and articles in obscure, hard-to-find journals in the United States and elsewhere. We have provided more than a thousand pamphlets and books on slavery from the 19th century. We have also included many modern histories of slavery. Within this library is a section containing all modern law review articles on the subject. This library will continue to grow, not only from new scholarship but also from historical material that we continue to locate and add to the collection.